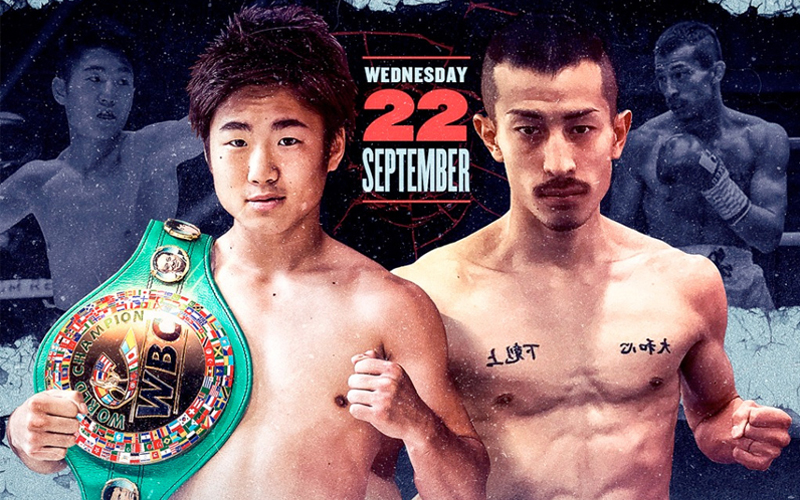 Home turf advantage in his ninth defense for Kenshiro (18-0, 10 KO`s) who`s been champion since 2017. His aim is to surpass the record of Yoko Gushiken who racked up thirteen successful defenses in this division as WBC champion including eight KO`s.

Standing squarely in his way, is Masamichi Yabuki, (12-3, 11 KO`s) who won the Japanese light flyweight title with a KO over Tsuyoshi Sato and defended it successfully with a UD over Toshimasa Ouchi. The challenger has a ninety one percent KO ratio and as such is a notable puncher, plus a viable threat. His pro debut was in 2016.

Masamichi has had three setbacks in his career thus far. Junto Nakatani defeated him via a UD.  Japanese flyweight champion Seigo Yuri Akui stopped him in ninety one seconds, wobbling him and then trapping him on the ropes. And he lost a close split decision to unbeaten WBA Interim light flyweight champion Daniel Matellon, which was an instructive development lesson.

He possesses genuine power, which Kenshiro would do well to take into account, but mostly hasn`t fought at the exulted level of competition encountered by the champion. Tempering that power, he`s developing his ring craft and has a good long straight jab and an excellent body attack.

Masamichi is going to need to employ all of this and considerably more, because Kenshiro, who`s undefeated has developed into a very complete fighter and an excellent champion. He`s trained by his father Hisashi, who in this time won the OPBF light heavyweight title and the Japanese national title, retiring in 2000.

Kenshiro`s pro debut was in 2014. He won the WBC light flyweight title in 2017 in his tenth fight, against the very capable Mexican southpaw Ganigan Lopez.  Kenshiro got the victory with a MD, via scores of 115-113 twice and one Judge saw it as a 114-114 draw.

Then on to the tall and stylish ex- champion from Mexico Pedro Guevara. Pedro started strongly but Kenshiro launched a ferocious body attack which was weathered, but slowed Pedro down. This fight was a MD with Kenshiro winning 115-113, 116-112 and a 114-114 on the third scorecard. He then TKO`d eleventh ranked Gilberto Pedroza of Panama, knocking him down twice and Referee Laurance Cole intervened to end the one sided drubbing in the fourth round.

The rematch with with Ganigan, which Kenshiro called for, was an altogether a different fight. A sinking body shot in the second felled Lopez, who wasn`t able to beat the count.

Kenshiro cut up ex IBF champion Milan Melindo, and the Ring Doctor advised that the fight be stopped in the seventh as the challenger`s vision was impared.  He defeated tough as nails Mexican Saul “Baby” Juarez by a wide UD, and then stopped WBC light flyweight champion Jonathan Taconing with a fourth round TKO.

Randy Petalcorin was next and walked into a firestorm. He somehow beat the count after being knocked down thrice in a torrid third round. But couldn`t do so, when he was again felled in the fourth.  Kenshiro`s opponent prior to this ninth defense, was Tetsuya Hisada, who was knocked down heavily in the second round, got up and finished the twelve rounds on his feet, but was comprehensively out-boxed and out-punched all the way.

Nicknamed “The Amazing Boy” Kenshiro`s first flush of youth has passed, but he`s still smilingly unmarked. His defensive capabilities have developed very well indeed, especially slipping punches, and he possesses a snappy left jab, which paves the way for some terrific body punching plus a particularly accurate and stunning offense with either hand to the head.

In this upcoming fight, the challenger will have to withstand and somehow negate Kenshiro`s extraordinary speed and proven marksmanship. Kenshiro has seldom been in any trouble. In winning the WBC Youth Championship against Rolly Summalpong, he briefly visited the canvass in round one, but got up, regrouped to win a UD.

One of the very best champions with an enviable longevity, Kenshiro is the firm favorite for this upcoming defense. He`s savvy enough to be careful in the early stages, in order to avoid Yabuki`s dangerous power, but the longer the fight goes on, the more he`s likely to dominate…and in style.

GENERAL INFORMATION OF THE LT. FLYWEIGHT DIVISION IN THE HISTORY OF THE WBC

33 WORLD CHAMPIONS HAVE CONQUERED THE WBC WORLD TITLE AT THE LIGHTFLYWEIGHT DIVISION.

4 OF THEM HAVE BEEN CHAMPIONS IN DIFFERENT CYCLES

THE WBC HAS HELD 148 LT. FLYWEIGHT TITLE BOUTS IN ALL ITS HISTORY

25 OF THEM WORLD TITLE BOUTS HVE BEEN IN LT. FLYWEIGHT DIVISION IN JAPAN HELD IN THE HISTORY OF THE WBC

LT. FLYWEIGHT FIGHTS BY COUNTRY IN THE WBC HISTORY

295 BOUTS HAVE BEEN HELD IN JAPAN IN THE WBC HISTORY

THIS WILL BE THE 25th. TITLE FIGHT IN THE LT. FLYWEIGHT DIVISION HAVE BEEN HELD IN JAPAN IN THE WBC HISTORY.

WBC Fight Schedule of the Week

All set for Budler vs. Soto